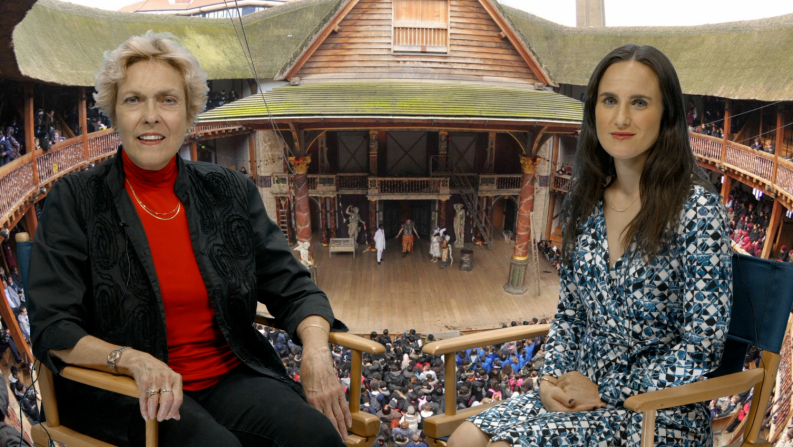 Original pronunciation is a popular topic among actors, directors, linguists and scholars. OP, as it is called, is the dialect spoken in Shakespeare’s time. We cannot be 100% certain as to how the dialect sounded when Shakespeare wrote his plays because there weren’t any recordings but linguists have found many clues in the plays and sonnets.

The rhymes in the plays and the sonnets are a few of the ways we know what the Original Pronunciation sounded like. For example during Shakespeare’s time all of the sonnets rhymed but today only 2/3 of them rhyme because the sounds have changed.  Also, writers during Shakespeare’s time wrote about the pronunciations of words. They mentioned that OP contained a “doggie sound” meaning that there was an “r” color to the vowels. Original Pronunciation is a “rhotic” dialect.  Rhoticity is a linguistic term for dialects where the /r/ at the end of words, or before a vowel, is pronounced.

Other Clues to OP Pronunciation

The puns provide more clues.  For example, in Jaques’ speech in “As You Like It” he recounts his encounter with Touchstone and says that after listening to Touchstone moralize on time, he laughed for an entire hour. He says:  “from hour to hour we ripe and ripe and then from hour to hour, we rot and rot; and thereby hangs a tale. When I did hear the motley fool thus moral on the time, my lungs began to crow like chanticleer, that fools should be so deep-contemplative, and I did laugh sans intermission an hour by his dial O noble fool!  A worthy fool!”  Modern audiences do not get this joke.  Some people figure out it’s a pun on venereal disease but more often than not this is a confusing section of Jaques’ speech for both audience and actor.

OP is a dialect full of weak forms.  Small words, such as pronouns, when they aren’t stressed, are replaced with schwas (an unstressed vowel) and “h”s are dropped.  “Hour” was pronounced “or” so we would hear:  “from hour to hour we ripe and ripe and then from hour to hour, we rot and rot; and thereby hangs a tale.”  The word “Whore” without an “h” is pronounced “or” in OP or original pronunciation.

Linguists figure out the pronunciation of words by how they were spelled. They analyzed a variety of spellings in the folios and they found that “prove” was sometimes spelled with the short vowel “pruhv.”  Then they would analyze rhymes in different areas of Shakespeare’s works and find “love” rhyming with “above”.  Therefore, from their analysis, they deducted that “prove” becomes pruhv, and “move” is muhv.

How OP Helps the Actor

There were often elisions in Original Pronunciation, and consonants and vowels were dropped. It’s the same as in modern speech – we tend to drop sounds so that “do not” becomes “don’t” and “cannot” becomes “can’t”.  The Elizabethans would drop consonants and vowels. Examples would include: “vigorous” would be “vig’rous,” “devil” was sometimes “del” and “never” was often pronounced without the medial “v” “ne’er”. Taking out the medial “v” allows for the full emotion to be carried by the vowel.  “Ne’er” is very different than “never.”  It’s a more vulnerable sound.  Vowels carry emotion, and the affect here is heartbreaking.  You can hear Jennifer speak these lines on the You Tube Channel.