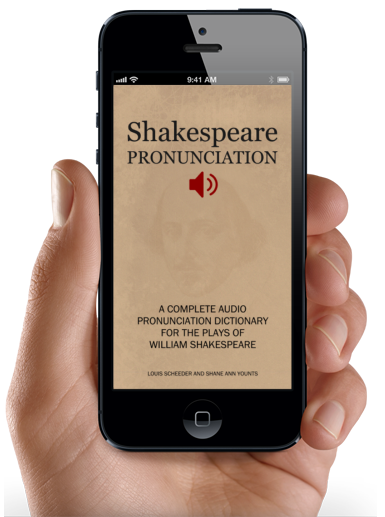 The Shakespeare Audio Dictionary was an idea that kept coming to me over a few years. Whenever I was working on a production of one of Shakespeare’s plays, either a professional production or the student productions in New York University’s Graduate Acting program where I teach, I noticed the actors holding my book “All the Words on Stage, a Complete Pronunciation Dictionary for the Plays of William Shakespeare” (co-authored with Louis Scheeder) in one hand and their iPhones or androids in their other hand. It seemed that the two things needed to go together.

At first I was overwhelmed with the idea of recording all of those “words, word, words” as Hamlet says. I counted them and there were 4993 words plus 143 Latin words and phrases. The need for a Shakespeare Audio Dictionary was clear but getting it to fruition seemed a daunting task.

I began asking my students, actors I worked with, and directors, what they thought of the idea and their response was enthusiastic and positive. Everyone loved the idea of being able to hear the words pronounced. Even with the pronunciations clearly respelled in the book, the actors preferred to hear the words. Often, when I was the Voice Coach on a production, the actors would come up to me with the book in their hand and ask me to say the word for them.

With the positive feedback from many sources, I asked my web designer, Ralph Mitchell, if he was interested in this project. He understood immediately the need for the Shakespeare Audio Dictionary and was interested in figuring out a way to transfer the book in to an audio app. Numerous discussions and meetings later, I began the process of going through the book and making the changes necessary.

It was no longer a book so all references to “book”, “pages”, “sections” had to be changed. In addition, because words would be looked up individually, each word had to have a separate entry. I believe all of the details of the book have been transferred to the Shakespeare Audio Dictionary app making it a resource that will be helpful to anyone reading, acting, or discussing the plays of Shakespeare.